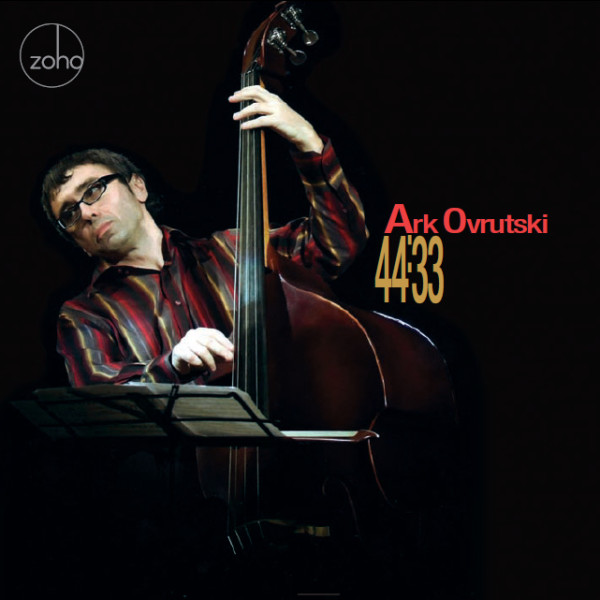 Loading tracks...
Update Required To play the media you will need to either update your browser to a recent version or update your Flash plugin.

Wherever in the world or in whatever disposition a jazz musician starts their professional journey, he or she must eventually come to grips with creating a personal approach based on technique, imagination and feeling. Ukrainian emigré composer and bassist Ark Ovrutski likes to say that since age 20 he has been an “international homeless traveller.” With 44/33, his third album as a leader, Ark has arrived.

A program of bright melodies, tight ensemble collaboration, individualized solos and firm underlying swing, 44/33 – titled for its running time — is an expression of accomplishment and direction from a coterie of players, instigated by a well informed, thoroughly engaged leader. Multi-reedist Michael Thomas, trombonist Michael Dease, pianist David Berkman and drummer Ulysses Owens are all players from the top echelon of New York’s abundance of talented jazzers. Ark is pivotal at the band’s core, generating material as well as holding everything together.

Born near Kiev, Ark was playing violin at age 8 — but not out of love of classical music. Influenced by his father who admired Duke Ellington and Ella Fitzgerald, he remembers being “always excited by swing.” Today Ark regards Charles Mingus as his hero, citing Mingus’ goal of advancing the art of a composer-bassist towards a melding of classical and jazz traditions. “I’m working on the challenge of being a bassist – not just a prominent soloist,” Ark explains. “I think the future requires bassists to have both classical-level technique and a jazz player’s ability to lead and improvise.”

Ark has pursued both paths of experience. He attended and graduated with a degree from the Russian Academy of Music, where he roomed with trumpeter Alex Sipiagan (frequently featured today in the Mingus Big Band) and met tenor sax star Igor Butman. Ark visited the U.S. in the early ’90s, then got a job as house band mainstay and artistic director for a jazz club in Krakow, Poland, where he remained for three years. He “travelled like crazy” all through Europe, enjoying extended time in Spain and Italy, before returning to Moscow to freelance and produce his first recording (not available in the West).

In 2003 Ark attended Berklee College of Music’s summer clinics in Italy. Told that to advance his career he should be in America, he applied for and received a scholarship to New York City’s Drummers Collective, in which he enrolled in 2005. He was soon gigging in Harlem clubs such as the Lenox Lounge, Minton’s and St. Nicholas Pub with the circle of musicians including vocalist Gregory Porter. He was also mentored by drummer Duduka Da Fonseca, with whom he has recorded and toured, and who is prominent on Ark’s 2011 album Sounds of Brazil.

In 2006 Ark began work on his masters degree in music at Rutgers University in New Jersey, studying with bassist Mike Richmond, drummer Victor Lewis and pianist Stanley Cowell, among others. Veteran bassist Bob Cranshaw advised him to go for a doctorate, which he’s done at University of Illinois at Urbana-Champaign. Taking the most ambitious compositions of Charles Mingus as his thesis project, Ark has just completed his degree requirements and at this writing is about to receive his Ph.D.

Such credentials are admirable, but jazz musicians are only as good as their music, and that’s where Ark & company shines. 44/33 opens with “New Orleans,” an upbeat ode to the Crescent City universally honored as the cradle of jazz. Pianist Berkman and drummer Owens set the pace, then Ark enters to deepen the street parade pocket. Thomas, playing soprano, and trombonist Dease trade phrases up ’til a chorus of joint improvisation, and converge on a hip, bluesy line. Appropriately for a tune celebrating New Orleans’ rhythms, Owens’ solo is stellar.

“Waltz” follows, demonstrating variety and consistency with pretty airiness. Ark’s intro seems to pulse with the funky insistence of a CTI-era bass part a la Freddie Hubbard’s “Red Clay,” however the quintet unfolds this composition in a different mode entirely. Dease, who’s worked with Ark in such Manhattan venues as Dizzy’s Club and NuBar since 2009, projects warmth through his muted sound; Thomas takes a silvery turn on alto sax. Ark’s spotlight passage has a confident throb that connects tunefully to his intro – which he notes “sounds like it’s in 5/4, but is actually in 3/4 (waltz time).” The track’s ending is especially mellow.

“Up” is, of course, quick, with Ark’s walk sprightly, not rushed. There’s something of John Coltrane’s “Impressions” in “Up” – maybe the sax/’bone harmonization that nods to that classic’s blend of Coltrane’s and Eric Dolphy’s inimitable voices. Berkman sparkles, as he does throughout this album whether soloing or underscoring. Ark’s break is dark and deft; he goes for an earthy, springy sound.

“Medium,” launched by a drum roll and trilling horns, is also companionable. The band makes its easy swing seem easy to achieve, but don’t take its mastery for granted. Thomas bespeaks post-bop on his soprano sax, which is also unusual; Ark, in his solo, dances on his strings. The group’s cool modesty is becoming.

The exacting melody “Milestones” – the “Milestones” written by John Lewis for Miles Davis’s 1947 debut with Charlie Parker, not the “Milestones” Davis himself wrote for his ’58 recording with the musicians who cut Kind of Blue – is 44/33‘s sole track not written by Ark. Dease’s arrangement is beautifully interpreted – I especially like the connection between the horns and Berkman’s accompaniment. Ark’s solo chorus is flavored by Mingus-like urgency, yet pleasure emanates from the music’s totality more than any particulars, as he binds the disparate instruments into a cohesive whole.

The finale “Path Train” was inspired by the commute to Manhattan Ark made daily in 2005, when living in Jersey City. Benito Gonzalez plays Rhodes electric piano, getting the big, glistening tone that Joe Zawinal promoted when he introduced this gear on Cannonball Adderley’s 1966 hit “Mercy, Mercy, Mercy.” Ark’s groove is just right; the quintet aces the concluding stop-time breaks as if the task were as natural as breathing, the better to frame Owens.

“As a composer, I’m still learning,” says Ark. “Trying to get to the truth with music is hard. Michael Dease says I use a lot of ‘slash chords’ – meaning one triad on top of another in layers, for polytonal and polychordal purposes, the way composer Darius Milhaud explored. But I try not to forget about the blues scale and feel. I like Wayne Shorter’s example: always modern, always jazz. Let’s not forget we’re playing jazz!”

That’s an important point for listeners as well as musicians. We want to hear propulsion, originality, coherence, imagination and excitement in jazz. We want sounds that beguile, provoke, amuse and sooth. We want those sounds to provide insights into those who make them, who we can then identify as a lot like us. That’s why we like their music: it resonates with what we’d do, if we but could.

Ark Ovrutski and his cohorts can, and do. So a “homeless international traveller” and his colleagues turn from being strangers into something more like neighbors, better than acquaintances — friends. Quite a feat, that they pull off in 44/33. – Howard Mandel

Howard Mandel, author of Future Jazz and Miles Ornette Cecil – Jazz Beyond Jazz, writes for many publications, reports for National Public Radio, blogs at ArtsJournal.com/JazzBeyondJazz and is president of the Jazz Journalists Association.