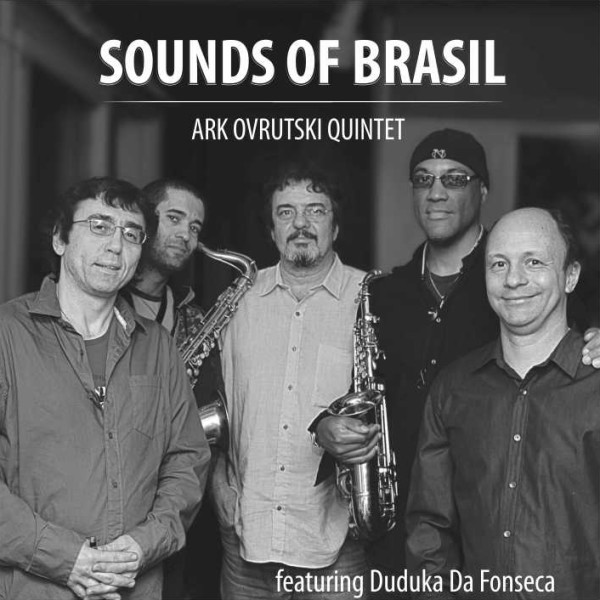 Loading tracks...
Update Required To play the media you will need to either update your browser to a recent version or update your Flash plugin.

The sounds of Brazil today are much more than those of the beautiful bossa nova melodies and rhythms that first garnered worldwide attention with the sensual sonances of the sixties’ recordings of Stan Getz and Astrud Gilberto that initially transported the music of that country, far and wide, all over the globe. They are the countless cadences of not just the South American paradise’s various regions and peoples, but also the myriad incarnations of them that have developed in so many places throughout the world – most notably first New York City, and now even from as far away places as the former Soviet Union, from where the fantastic bassist Ark Ovrutski, the leader of this date, originates.

Ark began building his career in Kiev, Ukraine, where he was born in 1963. Following his graduation from that city’s Music College, already an accomplished player of his chosen instrument, he moved to Moscow, where he earned a degree from the Russian Academy of Music in 1992. A few years later, the bassist relocated to Poland where he became a highly regarded member of the country’s fertile jazz scene through performances and recordings with Zbiegniew Namyslowski, Piotr Baron, Piotr Wojtasik, Joachim Mencel, Adam Pieronczyk, Kazimerz Jonkisz and others. After an eventful decade following his graduation from the Russian Academy he returned to Moscow in 2002 to make his debut recording as a solo artist with a team of local musicians. The independently released disc, New Age, a collection of original songs, revealed not only his prodigious talents as a bassist, but also as a promising young composer.

Having completed Berklee’s Summer Program in Italy in 2003, Ark eventually made the move to the United States in 2005, enrolling in the Advanced Performance Program at The Drummers Collective in New York City. Since then he’s gone on to earn a Masters Degree in Jazz Performance from Rutgers University (Class of 2010) as a double bass major under Mike Richmond (with a composition minor under Stanley Cowell) and is now working on his doctorate at the University of Illinois under Larry Gray. But arguably the bassist’s best educational experiences have been derived from his busy schedule of freelancing with many of the New York’s finest jazz musicians, including Curtis Fuller, James Spaulding, Larry Willis, Joe Ford, Steve Slagle, Javon Jackson, Patience Higgins, Gerald Hayes, Jim Rotondi, Carmen Lundy, JD Walter, Cynthia Scott, Donald Edwards and Steve Williams, in addition to the fine crew who join him here on his sophomore effort as a leader.

Ark first met Duduka Da Fonseca in 2007 on a tour the two made together with former Sonny Rollins pianist Mark Soskin. The bassist credits the Grammy nominated drummer from Rio de Janeiro with supplying the various Brazilian grooves that have transformed many of his compositions here. Duduka says of the bassist, “He’s hot – 99 degrees – and he understands and respects the complexities and subtleties of the different Brazilian rhythms.” In addition to leading his own critically acclaimed Samba Jazz Quintet, Da Fonseca is also a founding member of the cooperative groups Trio da Paz and Brazilian Trio, the latter which features the date’s pianist, Helio Alves.

Alves and Ark first began playing together two years ago, meeting musically on a gig with Duduka and the Brazilian songstress Maucha Adnet. The versatile Sao Paulo born keyboardist, a leader in his own right, well known for his work with bossa nova icons Oscar Castro Neves and Rosa Passos and jazz greats Joe Henderson and Paquito d’Rivera, shines throughout the date, adding both harmonic nuance and rhythmic fire to the music. Craig Handy and Ovrutski initially encountered each other in Moscow, playing together on a gig at LeClub there. The young veteran saxophonist, first known for his early work on tenor with Roy Haynes and Abdullah Ibrahim and recently earning much deserved recognition as altoist with the Mingus Big Band, is heard here on the latter horn, as well as on soprano sax and flute. Ark and Jorge Continentino first connected at Zinc Bar, the hip Greenwich Village bastion of Brazilian jazz, five years ago and have been the best of friends ever since. The Rio de Janeiro born saxophonist, who has played with many of Brazil’s greatest artists, including Milton Nascimento, Marisa Monte, Bebel Gilberto and Edu Lobo, fills out the band’s front line playing tenor and baritone saxophones and flutes.

Sounds Of Brasil is a unique blend of contemporary arrangements and original melodies in various different styles of jazz with Brazilian grooves. Ark explains his affinity for the South American musical genre – one he shares with other Russian musicians, like pianists Misha Piatigorsky and Andrei Kondakov. “I think the roots of that are in the history of Russian and Brazilian music of 19th century,” he says. “There is a style in Russian classical music – Russian Urban Romantic Songs (Romance) — that appeared at the beginning of 19th century, which is really melodically close to the Portuguese romantic songs of that period that became melodic source for chorinho and later for bossa-nova and samba. Talking about composing in general, Brazilian composers like Antonio Carlos Jobim, Joao Gilberto, Chico Buarque and Johnny Alf all taught me how to create bright deep melodies.” Ovrutski has learned his lessons well, as his own compositions here testify.

The opening 2nd Line/Partido Alto is a Brazilianization of an older Ovrutski piece originally composed with a New Orleans second line rhythm. It was Da Fonseca who felt the Brazilian partido alto groove – a type of samba particularly well suited to jazz improvisation – would be appropriate for the funky melody that is reminiscent of Herbie Hancock’s Chameleon. SOB, short for Sound of Brazil — the Soho nightclub that first filled the void of Brazilian music in downtown Manhattan – is a bright airy samba propelled by Ark’s electric bass. It features Jorge’s flute and Craig’s alto sax dancing over Duduka’s driving samba beat. Ark wrote Song For My Mom in honor of his mother Zinaida, who first brought him to the music school when he was ten years old. Craig switches to flute for this one, joining Jorge’s alto flute on the pretty bossa nova that features a lyrical bass solo by the leader. Mr. Hindemith is Ovrutski’s dedication to the 20th modernist classical composer Paul Hindemith. Originally written as an uptempo straight ahead jazz burner in traditional AABA form, its been Brazilianized for the date, with the A section played over a baião rhythm and the B as a samba, with a separate flute solo coda. The whole band is on fire here, with everybody stepping into the solo spotlight.

The first of two takes of Brasilian Carnaval is an arguably the more urgent reading of the Ovrutski original. A tricky polyrhythmic outing it has Duduka beating out a contemporary 6/8 AfroBrazilian beat, while the bass plays quarter triplets. The tune features the unusual combination Handy on soprano and Continentino on baritone, creating a distinctive harmonic sound. Baby’s Vibe is a beautiful ballad reflecting on the peaceful innocence of a child. Aptly reminiscent of Wayne Shorter’s Infant Eyes, the date’s lone quartet track features Jorge’s lush tenor saxophone. The product of a quartal harmony exercise given by Stanley Cowell during a composition class Ovrutski had with the master pianist, Samba in 4th begins with Da Fonseca playing the AfroBrazilian afoxé rhythm, associated with the Candomblé religion practiced by many Bahians, to start the track’s solo drum introduction to the piece. Decidedly Tynerish in temperament, the song’s powerful spirit hearkens back to the seventies sound that served to inspire so many during that period of rising AfroAmerican consciousness.

The second take of Ark’s Brasilian Carnaval is, in the words of the composer “the same, but it has totally different vibe. That’s why we saved it,” he says. The subtle and not so subtle differences in direction that both soloists and accompanists make throughout serve to highlight each of the individual band member’s creativity. The closing batucada clip played by Duduka and Jorge, the band’s two Rio natives, appropriately conveys the spirit of Carnaval that informs the date as a whole. A spirit that has now traveled all over the world, to places as far away as Russia and New York City – where Ark Ovrutski, the members of his band and many more like minded colleagues continue to develop that very special Sound of Brasil.